TEAM BUILDING 25,500 KILOS AVERAGE WEIGHT LIFTED BY A SAILOR IN A WEEK UP TO 35,000 KCAL/WEEK EXPENDITURE PER PERSON FROM PHYSICAL TRAINING AND SAILING learning how to keep their unstable America’s Cup Class boats in the air. The common belief is that by May when competition begins, winning races will require you to keep your boat foiling from the very moment you cross the start line right up until the moment you finish. Any moments of touch-down, when the speed drops dramatically, will probably mean you’ve handed victory to your opponent. Williams’ task is to ensure his squad of 12 sailors are as good if not better than their counterparts on the other five crews. Aside from putting in up to five or six hours on the water during a typical training and testing day, the athletes are also turning up for between 12 and 15 hours of full-on gym work every week. “My mission statement in the gym is all about delivering a fit and healthy athlete,” says Williams. “The more I can deliver athletes to the boat who are fit, healthy, hydrated, and fuelled, the better they become emotionally, physically, tactically. They are under a massive load, physically and mentally, and it’s my job to make sure they can tolerate that load.” Giles Scott should be able to tolerate the load. This 1.98m giant is an immensely talented and gifted athlete who dominated the Finn singlehanded class to win Olympic gold at Rio 2016 last summer. Sailing the Finn is extremely physical, so Scott’s used to living with pain, although now the pain is in a different place. “For me personally, it’s gone from being very legdominated in the Finn to very upper-body-dominated. I mean these boats are more physically demanding than arguably any boat, ever. Obviously we’ve got to up our game, and the way we are training is pretty relentless.” With such an enormous emphasis on creating allout power machines who are mostly turning handles as hard as they can, I wonder why Land Rover BAR hasn’t just recruited from outside the sailing world, maybe from power sports like rowing or canoeing for example. “Because they can’t sail boats, Andy!” shouts Scott, sounding like he’s answered this question once too often. Actually, as Williams points out, in the early days of the campaign a couple of years ago, Land Rover BAR did trial some non-sailing specialists but found that the learning curve of getting to grips with this complex sport were simply too great. Scott’s colleague, Nick Hutton, offers his own take on why sailing skills still matter. “It’s understanding the things that you don’t talk about, the things that you know instinctively are about to happen because you’ve done it so many times before. And if something random happens or something breaks or goes wrong, you just know what to do without having to think about it. With these boats going so quickly, if you do have to think about it, you’re already too late.” Thinking on your feet, thinking under pressure, is vital. As well as turning the handles to put power into the system, Hutton’s job is to control the hydrofoils with push-buttons and he needs a clear head to do it right. Get it wrong and the boat could crash down into the water and it’s game over. As the tactician calling the shots around the race course, Scott’s attention is also split between the physical task of grinding and the mental chess game of outwitting his opponent and handing the winning decisions to his boss steering at the back, Sir Ben Ainslie. “It’s a bit of a balancing act,” says Scott. “There’ll be times where I’ll be completely head down because the priority is powering up the systems and making sure that we can move the boat once we get there, the rig and the sails in and out. And then there are other times where I’ll be backing off a little bit and letting the other guys take on the brunt of the physical work, and I’ll be looking around and making sure that we’re going the right way.” Even the mighty Scott is wincing at the prospect of the torture Williams has in store for them this particular afternoon at their base in Bermuda. “Looking at what’s written down on this whiteboard, and the numbers that we have to achieve for an hour, the thought of having to do that this afternoon is a bit daunting, if I’m honest.” The old military motto, ‘Train hard, fight easy’, comes to mind. Except that if the training feels hard, the battle to win the Cup will be much harder. After all, Great Britain has been trying to win this trophy without success since 1851. That’s the history, the motivation that keeps the crew at Land Rover BAR working themselves to nearexhaustion in their brutal but necessary gym regime. 41 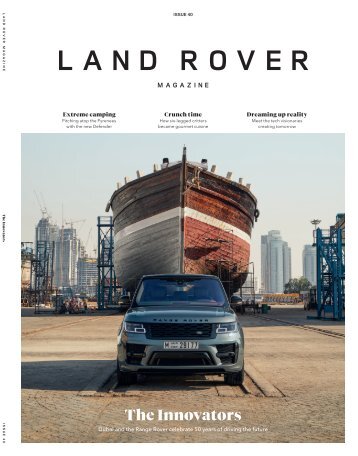